The Eagles Band in the Veterans Day Parade, 2006. [Photo via Discover Pittsfield]

The time has come to gather up the family, grab some lawn chairs and blankets, and head out to your favorite local park, lake or lawn to enjoy some sun, picnicking, and good company. All that’s left is to find some good entertainment to top off a relaxing evening, and who better to provide it that Berkshire County’s own Eagles Band?

This summer, The Eagles Band has a full schedule of outdoor concerts all over the county, and they are eager to perform.

“We rehearse every Monday night,” says Dick Paul, performance manager and treasurer of the band, as well as trumpet player.

“Right now we’re preparing for the big Bandfest in lake George, N.Y., that we do every July,” he said. “It’s a lot of fun. There’s a lot of community  bands just like us, and you get to see how everyone else does things and what they’re playing.”

The Eagles Band is a  non-profit community band in which players donate their time simply for the love of performing.

“Everyone is welcome to join us, no tryouts or anything, just come in and play,” said Paul. 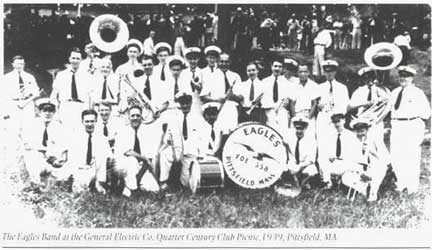 The Eagles Band circa 1939. [Photo via Discover Pittsfield]

It has been a favorite of the Berkshires for the better part of the last century. Founded in 1936, the original marching band has evolved into primarily a concert band containing over 50 members of all ages and experience, and it now proudly holds the title of the oldest continuing performance ensemble in the county. In 1993, it was named the Official Band for the City of Pittsfield.

Why all this hubbub over a community band? Paul offered a few reasons.

“I think it’s…we’ve been together for a long period of time, you know, more than seventy years,” he said, “and it’s the variety of music we play, from marches to Broadway to classical…And of course we have a lot of family followings.”

The Eagles Band offers a wide variety of excellent music that spectators of all ages can enjoy. Their full concert band consists of multiple smaller ensembles: there’s the Wind Ensemble, playing everything from Broadway show tunes to classical pieces; the Brass Ensemble, which offers both traditional and contemporary/pop brass arrangements; the Marching Band, which has performed in four states and can be found at the majority of community events; and the Eagles Stage Band, bringing the big band sounds of the late 30s, 40s, and early 50s.

And, of course, the fact that all of the Eagles Band’s concerts are free to the public doesn’t hurt, either.

“We get paid by somebody,” Paul jokingly added, “but the audience is not charged.”

So come Tuesday night, when you’re just itching to get outdoors after a day at the office, head on over to Springside Park to enjoy a band that is not only a major part of the community but of its history as well. The evening’s selections from the Eagles Band will include themes from the musical Candide, soon to appear on the Mainstage of the Berkshire Theatre Festival, and an international assortment of inspired tunes from Mexico, Italy and Scotland.

Besides three Eagles Bands concerts, Springside Park will be hosting a free outdoor show by the Mettawee River Theater Company on July 27th. The company, returning to the area for the fifth time, “creates original theater productions which incorporate masks, giant figures, puppets and other visual elements with live music, movement and text, drawing on myths, legends and folklore of the world’s many cultures for its material,” says their website http://www.mettawee.org. This year they will be performing “Beyond the High Valley.” The show begins at 8 pm.