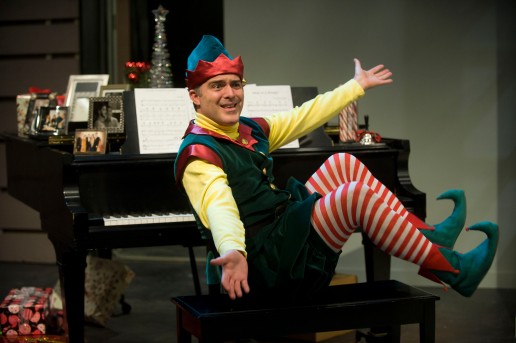 Peter Davenport as Crumpet the Elf. [photo by Kevin Sprague]

Hearing “Jingle Bells” and “Frosty the Snowman” on repeat for two months could turn anyone into a Scrooge. Luckily, venues throughout the Berkshires have a variety of great entertainment planned this holiday season that’s sure to get everyone in the spirit.

Infinity Music Hall in Norfolk, Conn., will have everybody rockin’ around the Christmas tree this year with guitarist Gary Hoey sharing his own groovy renditions of seasonal favorites on December 2, and former Berkshirite James Montgomery and the Uptown Horns ringing in a bluesy New Year. The Colonial Theatre in Pittsfield, Mass., also has a full lineup of exciting holiday shows, ranging from the Empire Brass on November 30 to Romance, Soul & Rock ‘n’ Roll on December 17 and 18; The Clark in Williamstown, Mass., features the Dave Bennett Septet on December 3 for a Benny Goodman holiday special.

Shakespeare & Company presents the edgy one-man play The Santaland Diaries, based on the essay by author and humorist David Sedarist, December 2-30, starring Peter Davenport as Crumpet the Elf.

“Crumpet is really defined by who is cast to play him,” says director Tony Simotes. “[Davenport] has a kind of wry edge to him. His humor is not slapstick; it’s more of a twinkle in his eye. I think he will be a finely honed elf, someone that has a quick wit and always has a subtext actively at work–he has a comment about everything and everybody and doesn’t always keep it to himself.”

On a more traditional note, the Berkshire Lyric Theatre offers holiday choral performances throughout the region, including shows in Stockbridge, Pittsfield, and Dalton, Mass.; and the Mahaiwe Performing Arts Center in Great Barrington, Mass., plays host to both the Camerata San Marco ensemble for a Close Encounters With Music concert on December 4 and the Berkshire Back Society for its annual New Year’s Eve celebration.

And, if there are still some Scrooges lurking around after all that, the Berkshire Theatre Festival stages its yearly rendition of A Christmas Carol, Charles Dickens’s classic, heartwarming tale, December 11-30.