As published in Berkshire Magazine, May 2016 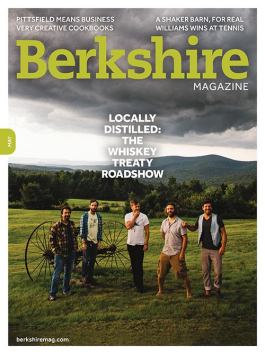 Tory Hanna is standing barefoot in a brook, pants rolled up, strumming a guitar. “He’s a really talented guy and a great songwriter in his own right,” observes fellow musician David Tanklefsky, “but I think he really shines by allowing everyone else to shine as well.”

As Hanna continues to play and sing, his four friends join in, creating a folksy singalong worthy of the woodland surroundings. This isn’t a backyard jam session, but rather a scene from an award-winning short documentary, Whiskey Treaty Roadshow, about the group by the same name that labels itself as “a collaborative band that brings together five Massachusetts singer-songwriters in the vein of Americana, rock, and roots-folk music.” In just a few years, the impromptu band has also toured the state, released a live album and film, and played a number of big shows. Locals flock whenever the band has a Berkshire gig–one is just around the corner when the fivesome perform at the MASSGathering festival at Great Barrington’s Ski Butternut during Memorial Day weekend.

The band consists of Berkshirites Hanna, Billy Keane, Chris Merenda, and Greg Smith and Cambridge-based Tanklefsky. Ranging in age from late twenties to late thirties, each brings his own dedicated following, which increases their collective local appeal. The group’s passion for music is evident. Real estate, solar development, broadcasting, and even odd jobs are how these men make a living, yet they still make the time to tour and play together. Merenda is the only member that plays music full-time, a fact that garners deep respect from his bandmates.

Despite its brotherly vibe, Whiskey Treaty Roadshow is challenging in concept. How do these band-leading, independent singer-songwriters share a stage without it becoming the ultimate ego contest?

“It’s like a sharing with other artists that you respect,” says Merenda. “You get to see behind the scenes of other songwriters—but the ego is still there, it’s true.”

When performing together, the group has no clear leader, but instead passes the baton around organically. “Hey Chris,” Keane might say, “how about we hear that song of yours I like so much?” A set list is rarely followed, and each brings his own unique sound: Hanna, the resident crooner, brings the blues, while Merenda is the raucous bluegrass-loving, banjo-picking storyteller. Keane is the audience conversationalist and singalong master, and has an edgy folk sound. Tanklefsky is a sentimental, vivid songwriter that melds 70s country and folk with a touch of pop, and Smith matches Americana guitar and harmonica with warm, raspy vocals. Collectively, they create a rowdy, welcoming dissonance that reverberates around the room and down the street, calling everyone to join the fun.

Whiskey Treaty Roadshow was born out the members playing together at both the Whiskey Treaty Festival, which Hanna and his wife, Susie, put on annually in Greenfield, and a stint of collaborative shows in Brooklyn. The idea was never to create a new band–until someone suggested taking their show on the road. The musicians were inspired by the idea of a traditional roadshow, with acts like jugglers and acrobats all sharing the stage with the common goal of entertainment.

“I had seen a poster of an old Vaudevillian show,” says Keane. “That was the genesis.”

“And the idea of that is actually deeper than a lot of different acts for the audience, it’s people supporting each other,” adds Hanna, noting that the roadshow theme melded perfectly with the cooperative nature of the band.

And so the documentary was born. Susie Hanna was the executive producer and band friend and master marketer Tim Bradley directed the short film that follows the group on a four-day tour throughout the state. With an original score and breathtaking scenery, it’s no wonder the piece, released last year, won hearts and awards at film festivals across the nation.

The Roadshow has achieved a lot in a just a few years, including a live album when it played the finale of the inaugural Shire City Sessions, a free outdoor concert series at Pittsfield’s Shire City Sanctuary.

“I was just really impressed by their collaboration and their whole kind of way of just working together and being really supportive of each other…so I just thought, ‘Wow, what a great fit,’” says Crispina ffrench, Sanctuary owner. “It turned into this amazing, really multiple-faceted collaboration, which was so cool.”

“From there the initiative to turn it into more than a concert and to record it all for a live album and video came from the band,” explains Alan Bauman, owner of CompuWorks and a Sessions organizer/sponsor. “I was more than a little bit enthusiastic about the end result. It was a perfect way to cap a first season.”

The band found the perfect sponsor for their project in Hudson Whiskey of New York, and Darren O’brien of Pittsfield-based Encore Audio to do the sound. On a parking lot stage with a pallet backdrop and twinkling lights strung in every direction, they audio- and video-recorded the entire show.  Heart of the Run, debuted in March at The Bowery Electric in New York City, where shots of whiskey abounded, of course. It is available via digital download and CD on their website, where videos of the entire show can be viewed as well.

Still riding high on that success, the band plans to continue their collaborative efforts, perhaps in a more permanent fashion.

“I think everybody would be really pumped up if this turned into something where we could tour nationally or internationally, and make a go out of it,” says Hanna, “because we feel like what we have to share, what we have to offer, what we’re talking about, it’s worth something….it’s stories, it’s real life, you know?”

View the documentary, purchase the album, and find music videos and additional tour dates at http://www.thewhiskeytreaty.com